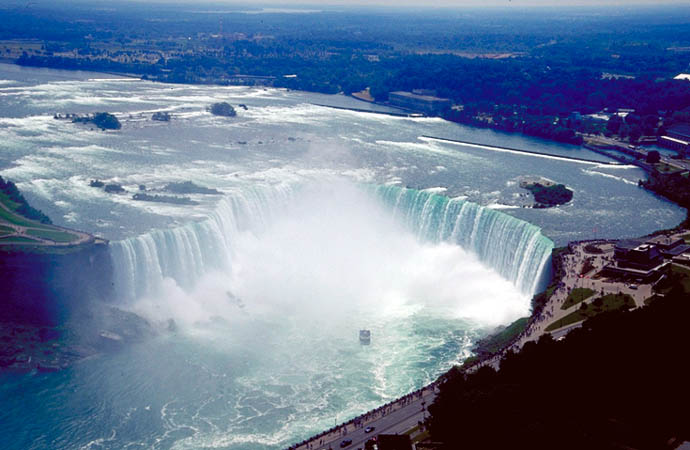 Located on the border between Canada and the United States is one of the wonders of the most amazing nature can be admired in the world, Niagara Falls. It is one of the most visited tourist spots in North America during the year.

Formed at the end of the ice age, between 30,000 and 50,000 years, the origin of the name Niagara comes from the language of the Iroquois Indians, the original inhabitants of Lake Erie. In their language, Niagara means “thunder of water”. These Indians considered this natural wonder was where dwelt Hinu, the God of Thunder.

The first written record we have of Niagara Falls is the year 1535 by the French explorer Jacques Cartier, discoverer of Canada, who was sent by Franciso I to this place in the world to find a new route to supply Europe with Asia North America, by the so-called Northwest Passage.

The Niagara Falls are on the border between Canada and the United States in the Great Lakes region. The spectacular fall with the water formed by the gap between Lakes Erie and Ontario, a vertical drop saves the Niagara River on three separate jumps. Goat Island splits Niagara into two parts: the Horseshoe Falls, and Niagara.

Horseshoe Falls, west of Goat Island, are on the Canadian side, measuring 640 meters wide and 54 in height, the Niagara, or American, located east of the island, have a front of 323 meters width by the Niagara River plunges from a height of 55 meters.

The volume of water that is Niagara Falls is close to 6,500 cubic meters per second, a figure that varies depending on the season, and the time of day, is that its flow is regulated by hydropower plants were built on both sides of the Niagara River in order to harness the immense potential of the waters.

The falls generate so much energy to light a quarter of the state of New York, and the entire Canadian province of Ontario.

The sheer beauty of the landscape was not long before the attention of speculators, so in the year 1885 was created Queen Victoria Falls Provincial Park, in order to protect the environment of conifers and meadows surrounding the falls.

In the nineteenth century, Canada and the United States founded two cities on both sides of the falls, two cities that had something in common, and it’s being called the same: Niagara Falls. One is located in Canada, in the province of Ontario, and the other in the United States, in the state of New York. The two cities are connected by a bridge, the Rainbow Bridge. Both Canadian and American shore living from tourism.