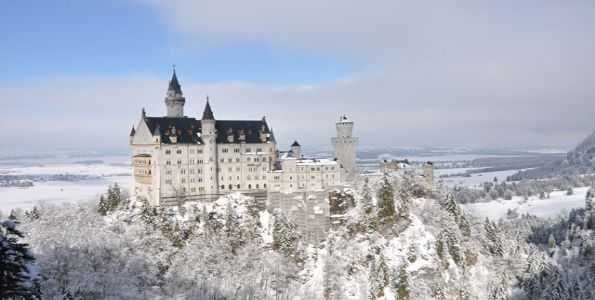 Neuschwanstein Castle is one of the most visited tourist destinations in the world. Perhaps it’s the quaintness of its image, its corridors mysterious, or just the architectural beauty built in stone and surrounded by a landscape that makes one sigh.

The castle is located in the region of Fuessen, in Germany, in an old town surrounded by old castles, monasteries and castles, many now in ruins. Close Neuschwanstein there is even an ancient Roman road, the Via Claudia, which spans the region from from Wuerzburg to Innsbruck.

The build order was given by King Ludwig (Ludwig II) of Bavaria, known as Ludwig the mad. The design was commissioned from the architect Christian Jank.

Louis II became King of Bavaria after the death of his father, Maximilian II, and since coming to power, fought for reconciliation with the German states and to improve relations with Prussia, despite having already signed one family alliance with Austria. His political life was complicated and quite irrational, because what he got the nickname Mad King.

As failures occurred during his reign, Ludwig II moved away from the capital, Munich, devoted himself to what would be his great work, the reason that made history. The construction of Neuschwanstein Castle.
On a hill in southern Bavaria, near the castle of Hohenschwangau, were in the early 60s the ruins of castles and Hinterhohenschwangau Vorderhohenschwangau. Louis II, inspired by a trip to Germany and another trip to France, wanted to build on that hill a castle mimetizara with mountain and nature, being the envy of European Romanticism.

Ludwig II wanted to impregnate his castle in the work of Richard Wagner and it turned to Christian Jank, a stage designer for theater it is outlined the work, later to be realized by the architect Eduard Riedel. For technical reasons, the remains of a medieval castle located on the hill could not be present in the final work, so it was carried out the demolition of the remains over 1868.

The first stone of the Gothic castle began September 5, 1869. Construction was fast compared to contemporary works, getting in just three years the cellars were completed, and three years later the entire first floor. Besides the main building, also built a hut that was completed in 1873, allowing him to move Luis II there to monitor the construction of his project.

The castle was built with conventional brick, which was later coated with other types of rock to give it splendor. The front was covered with limestone, the viewpoints and the covers were coated and sandstone arches, columns, windows were covered with marble capitals.

More than 200 workers were continuously involved in the construction of the impressive castle Neuschwanstein. These were provided with a safe which were covered by his heirs if a fatal accident killed the builder or continue their work prevented.

The castle reached its peak in 1880, and four years internal dependencies evenings were advanced enough that Louis II could move to the main building. Two years later, in 1886, when the outer castle structure was advanced, the body of Luis II was found in Lake Starnberg.

By then Louis II had been declared unfit to rule Bavaria and was under psychiatric care. On June 13 of that year, Ludwig II had asked for a walk in the vicinity of the castle, for it was accompanied by his psychiatrist. Both were drowned in the lake, raising suspicions about how he really died.

The Neuschwanstein Castle works were paralyzed for six years, resumed in 1892. The original design of the castle was simplified to be finished, as its construction had left the monarchy in Bavaria near bankruptcy, with liabilities of more than 14 million marks.