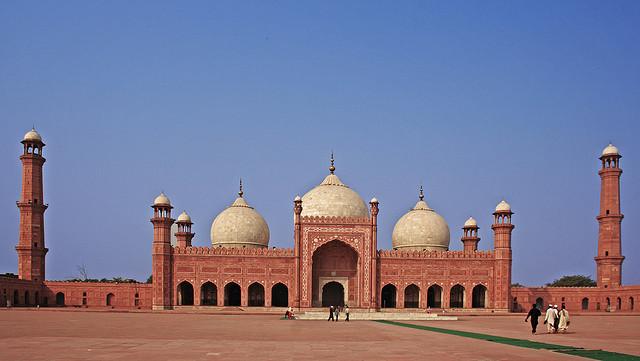 Lahore is the capital of the province of Punjab, in northeastern Pakistan, besides being the second most populous in the whole country, and has several architectural gems to visit. One of them, which is also all a religious symbol, is the Badshahi Mosque, which is also known as the Royal Mosque, the second temple of this religion in size of the country and the fifth worldwide.

The temple was commanded to do by the sixth Mughal Emperor Aurangzeb in the second half of the seventeenth century and was completed in the year 1673. This impressive building eventually became one of the symbols of this city and one of its major attractions is a great representation of the beauty and grandeur of the era in which it was built there.

In the Badshahi Mosque fit 55,000 people and when visitors come to her are surprised by its beauty and majestic it is, being the largest in the world for some time. Its exterior is decorated with some stone carvings and marble layers of red sandstone, and in it you can see the influence Indo-Greek, Indian and central Asia.

It also highlights its huge interior courtyard, its aisles, the minarets are each of its corners and immense door, still details that bring everything that was Muslim architecture until the time in which it was made and is an excellent example to study the various eras. While you can look inside the prayer chamber has seven compartments that have carved spectacular.

I recommend looking at all the decorative details that you have, making it one of the most beautiful in the world, as well as going to various parts of the city to see it from far away, rising majestically with its minarets and domes, forming a landscape that seems out of a film or a painting.