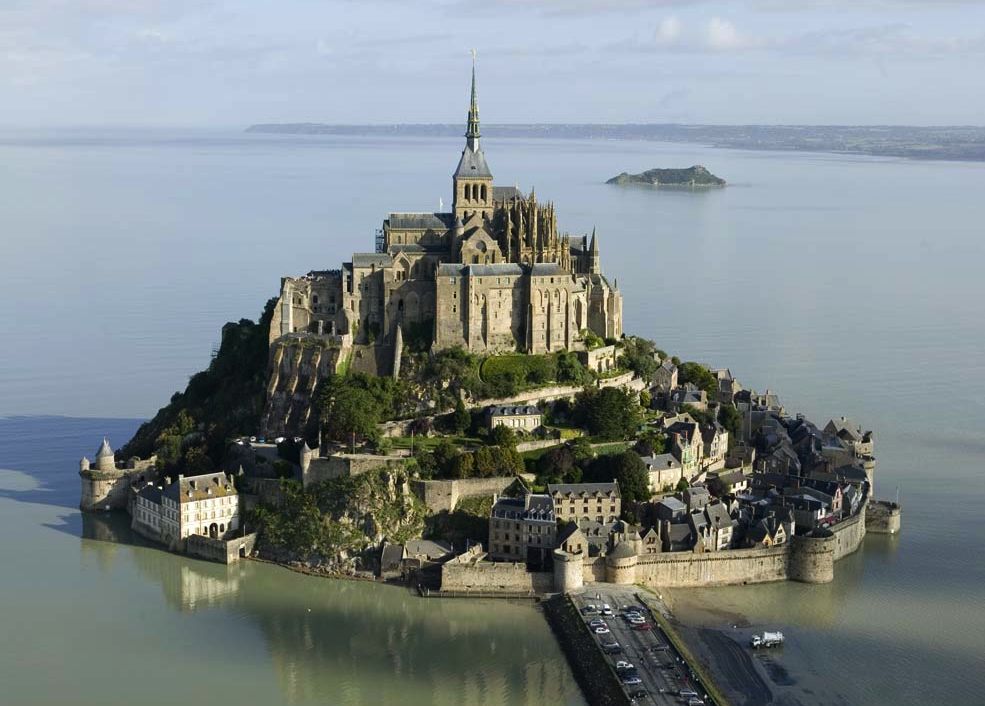 Chosen as World Heritage by UNESCO in 1979, Mont Saint Michel, Mont Saint Michel and Mont St. Michel is the third most visited religious monument of France, just behind Notre Dame de Paris and the Sacred Heart, or doubt one of most beautiful and visited France, and the thing is not surprising, since the Mont Saint Michel is a small island connected to the mainland by a road (beyond the current road was covered by water when the tide came), where is a small medieval town that maintains the same appearance for centuries over which rises an abbey where impressive Romanesque and Gothic live in perfect harmony.

If you go down the road several miles before, how can you distinguish the imposing silhouette of Mount San Miguel in the distance, standing out among the plains of Lower Normandy, anticipates and we found out later. Once we move across the road from the mainland to the island, Mont Saint Michel is even more power, if possible, and the abbey acquired very impressive, and very beautiful, if the day is sunny, and somewhat gloomy if the day is too cold and gray, but in any case, the image of the Mont Saint Michel continues to impress and be recorded in the memory of all who visit. As if the sight of the island, with the abbey on the top of it, it was amazing, if the tide is out side of Mont Saint Michel is huge lakes of mud and quicksand, a death trap in the past surprised many unsuspecting works and today the Mont Saint Michel and only magician in the world.

Once beyond the walls of the citadel, entered another era, a world that no longer exists, we know that only for the many tourists and pilgrims who will accompany us on our way, as the appearance of the labyrinthine streets of Mont Saint Michel is the same as they had for centuries, and it costs nothing to imagine that behind every corner may seem a knight in armor on a horse or a group of farmers to supply the Abbey in a carriage drawn by oxen.

The history of Mont Saint Michel has an almost supernatural origin, as in many other places of pilgrimage and dates back to 708, when Aubert, Bishop of Avranches, had built a chapel in honor of St. Michael the Archangel, after the submission of this three times in dreams to demand a temple in her honor. From here, the Mont Saint Michel started to become an important place of pilgrimage, which led to the Benedictine monks of the abbey were installed as the bottom of the mountain must develop a people who lived in the trade of candles (candles today become on postcards, mugs, and other souvenir items, restaurants and hotels that bloom everywhere and unfortunately get a mercantilist point of Mount San Miguel). Over the years, the Mont Saint Michel became an important strategic military increasingly important during the 100 years war, and was never taken by the British troops, despite his tireless efforts to get which became Mont Saint Michel , a symbol of hope and faith of the French during the war years continued. From the French Revolution to the Mont Saint Michel, in 1874 it became a prison, so it is also called as the small Bastille, and in 1979, the Mont Saint Michel was included on the List of World Heritage by UNESCO .