In western India, in the state of Maharashtra, there is a place tucked away amidst mountains Charanandri: Ellora, one of the most unique sanctuaries Asia. Perched among waterfalls and streams, rises a set of 34 caves temple, carved into the rock over a thousand years ago. Among them Kailasanatha temple, the king lost jewel Krishna I.

Maharashtra is one of the states in India with more glorious past. Its geography is trimmed so strong temples and jaw-dropping amazing bill most seasoned traveler.

Mumbai, the capital and financial and industrial heart of Maharashtra, is a megalopolis whose hectic pace of life has nothing to do with spirituality and provincialism of the rest of the state.

At 25 kilometers from the city of Aurangabad, in the midst of the mountains of Charanandri, Ellora is a sacred place that was the center of worship for over 500 years, during which temple caves were built different religions, the remaining 34 today.

It is difficult to understand the reasons that led these men to build over a thousand years so unique sanctuary in the rock mass, and say “build” but the right word is “digging” since it is a troglodytic complex.

They are not exempt buildings, erected in the traditional manner, but are carved into the stone of the mountain, such as Petra in Jordan, Abu Simbel in Egypt or Turkey Cappadocia.

At Ellora there are 34 temples belonging to different religions: Buddhism, Hinduism and Jainism. For all of them were very attractive as the location of the place, surrounded by mountains, as the idea of cave temples, which added a mysterious spiritual value to this holy shrine.

The first to reach the remote and mountainous Ellora Buddhist monks were back in the seventh century. They always looked isolated and rugged, suitable for meditation and the search for truth. Also, Buddhism is the path to wisdom like a mountain you have to go uphill until you reach nirvana. 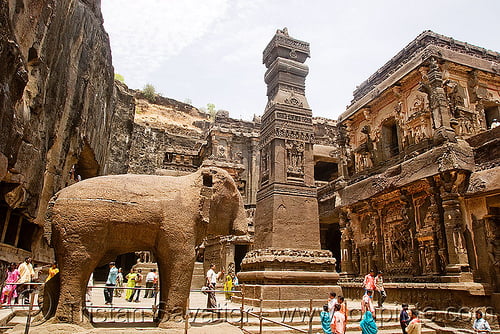 Ellora also produced a magnetic for Hinduism as a whole rocky crescent shaped, very suitable for the worship of Shiva, a god mole that is probably the most revered in India.

Hindus also was symbolic for the combination of a beautiful natural environment, the temple mountain and caves, because in Hinduism the most important idea of man is to find his place within the creation, understanding that man is one more piece of nature.

For the Jains, whose religion combines aspects of Buddhism and Hinduism, Ellora had great fascination. Their temples emanate the austerity of his faith and the opulence of his art, in which the smallest detail is as important to the whole work.

The temples of Ellora are simple Buddhist caves few simple composite of some cells. Also dug a monastery, where monks lived devoted to study and meditation.

The interior of these monasteries was also of great austerity, consisting of a central hall community, stone tables and columns that served to separate spaces, since the walls would not let in the light to the bottom, as the depth of the excavation was enormous. 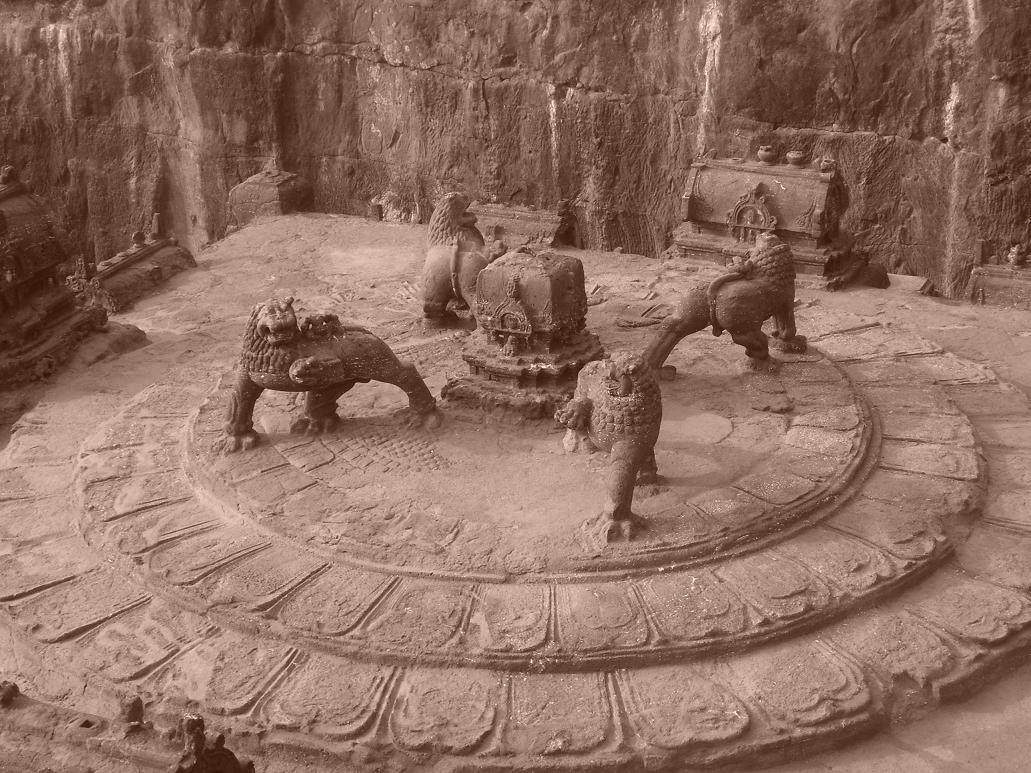 Inside the Jain doctrine gives a very striking: the faithful are probably the most radical ascetics. Vegetarians extreme, can become as dramatic as those “skyclad” living naked to show his detachment from everything earthly.

In contrast to this austerity, Jain artistic concept is probably the most lush and profuse who are known in the history of mankind. In Ellora manifests this duality Jain, combining almost minimalist asceticism and opulence in the decoration of its caves.

Anecdotally, I remember wandering around the caves came to my ears a melody, a voice was chanting a mantra. I looked around until I found it captivating sound that came from inside one of the caves Jains.

Trapped by that voice, I got to the cave and sat on the floor, entranced, listening, leaning against a wall, I lost track of time.

When my eyes adjusted to the darkness, I could see the bottom figure of a Buddha that had been there for over 1,300 years, no one else. What was the mystery? Would they have put some kind of hidden loudspeakers to create an effect of spirituality?

After a few minutes the voice trailed off, and behind the Buddha came a middle-aged man leaving smiled with surprised look. My expression must also be of stupefaction.

It would be the sound of the cave, the sweetness of the voice or the beauty of the melody, but I presume it to be well versed in world music and have heard almost everything I had ever heard anything so beautiful, never forget it. 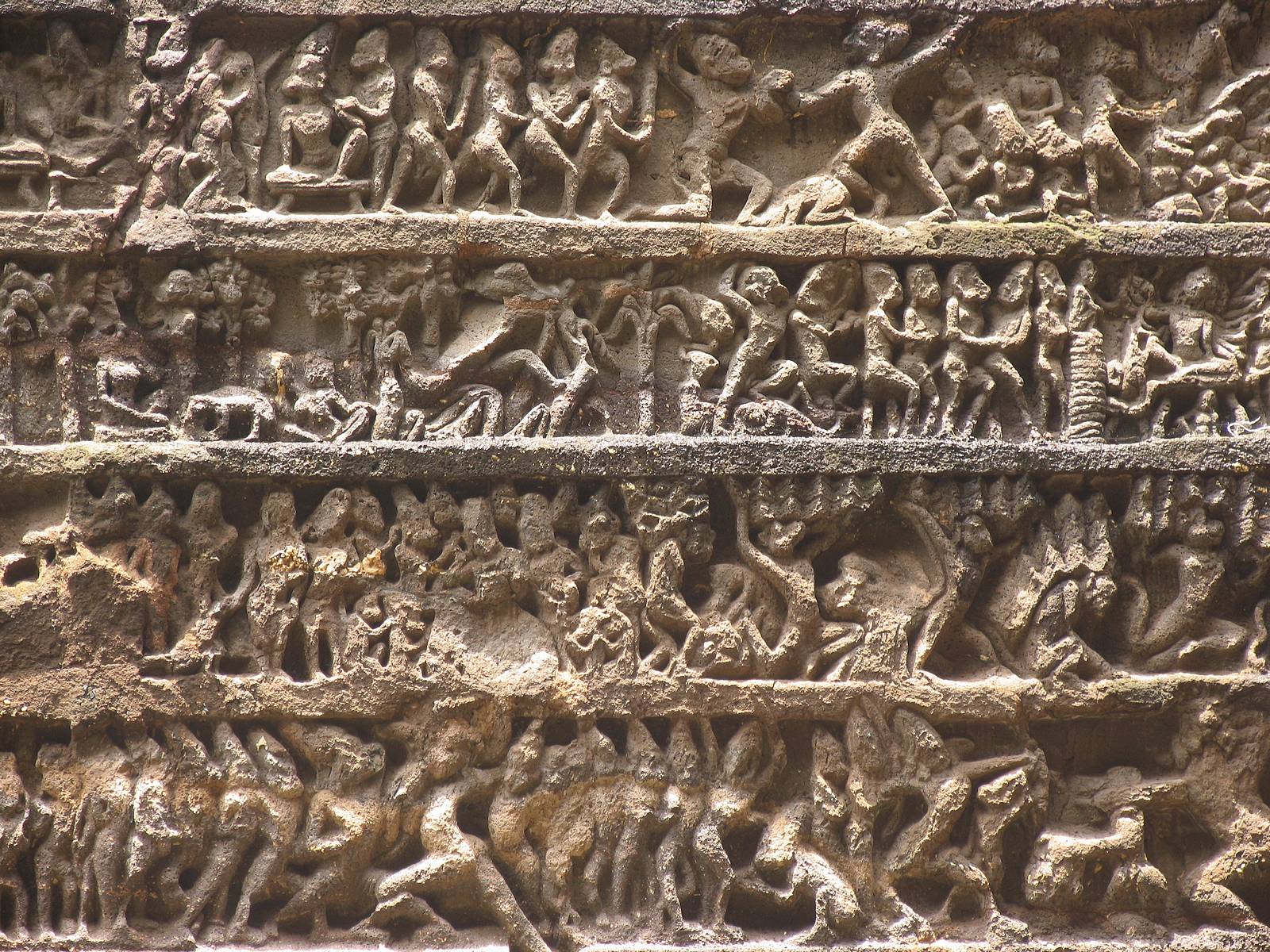 But undoubtedly the most interesting temples are Hindu site, and among them the jewel of Ellora, the temple of Kailash- the abode of pleasure, the same name as the most sacred mountain in the Himalayas, the holy place of pilgrimage for Tibetans.

Dedicated to Shiva, the Lord of Kailash Kailasanatha or, rivaling in grandeur with Abu Simbel and the palace tombs of Petra, and very well could be part of the list of the wonders of the ancient world.

Large sets of ancient cave dwellings and temple of Kailash differ in the method of its construction: while the former are excavated from the outside in through the vertical wall of rock, and some temples Kailasanatha Ellora are made perforating the mountain top to bottom.

This curious technique, so complex at first glance, should not provide big problems instead the workers, once at the top of the hill, marking the perimeter of the building and began to cut blocks of stone to get an aisle or gallery over him, leaving inside the mountain piece would chisel.

It so happens that the Indian workers had more training as sculptors or architects and builders, in fact, the Kailasanatha not considered as a building but as the largest sculpture in the world.

Probably the “masons sculptors” Ellora did not know the use of scaffolding, so contrary to the universal norm, began the cart before the horse, in such a way that the first excavation was shallow perimeter, maybe one or two meters, to comfortably carve the ceiling and cornices.

Once the roof, returned to dig a few feet of the perimeter corridor down to comfortable working height and the upper parts of the facade. Thus, it was descending stepwise, inch by inch, inside the mountain, and construction took shape from above.

Therefore, the ultimate in soils were performed and bases of the columns, then of course, there were the foundation, as it was a single block casting for practicarle doors, windows and rooms.

Despite the difficulty of this construction technique, the hardest part was to see where and how the workers had to sting.

To do this, the architects of Ellora made use of an ingenious method: elaborated a model of the temple and placed in a box with no lid that subsequently filled with a dark liquid to cover the model almost completely.

The workers had to work only what is seen above the liquid, ie the roof with its ornaments, and once that was finished this part, some fluid poured out of the box and it appeared the top of the walls and windows.

Thus, the liquid would gradually evacuating to display the model to complete the entire building.

The Kailasanatha, 30 meters high, was built in 765 by King Krishna I, and is the largest, complex and richly decorated of all of Ellora. Enter it produces an overwhelming feeling.

Passing through the entrance, the visitor is on a space flanked by two columns of 15 meters high, with each of them, there is a carved stone elephant size. 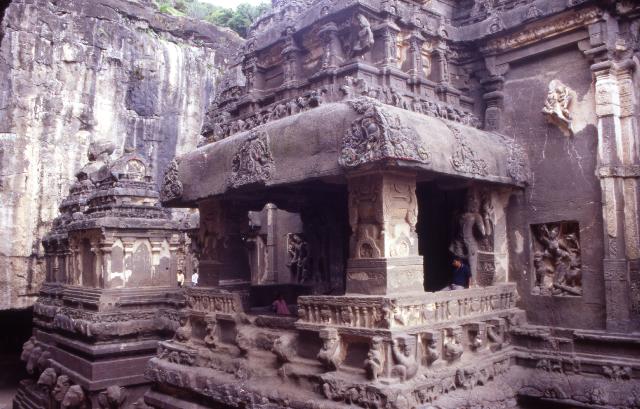 The mountains surrounding the temple as a belt contains excavated around the perimeter thereof, a gallery with a large veranda and two side chapels so big they could have been independent temples.

Going inside and climbing the ladder came to a terrace that serves as the entrance to the main hall of the temple, the ‘mandapa’, whose roof is the largest monolithic cover the world, supported by 16 columns.

Down the ‘mandapa’ is the inner sanctum of the temple, a dark cubicle where lies the “lingam”, the most venerated image in India, which is a phallic sculpture that symbolizes the creative power of Shiva.

Devotees carry flower petals, as well as milk, incense and other offerings that deliver the priest, the only person who can access the room the “lingam”, so that the spread of the phallic image.

In this part of the visit, the photographic equipment I chose to cover this trip again I pose the same problems I had in Kerala. With two compact in my bag, I find myself again in a situation almost impossible to photograph, much as one of them shone zoom of 28-90 mm and f2.

Inside the darkness reigns Kailasanatha, and my camera they are unable to focus, the use of flash is prohibited, and when I can focus in manual mode, the picture comes trepidada. Oh, how I missed any SLR with a stabilized lens!

The glory of Kailasanatha lies in the richness and profusion of his sculptures, which cover almost all the temple, both the interior and the exterior. Among them is a row of life-size elephants around the base of the building, as if the temple rested on their backs.

In many of the walls are reliefs that reflect scenes from the Ramayana and Mahabharata, the two great epics on which underlies all Hindu culture, and also some scenes from Kamasutra.

The Kailasanatha itself is an exhibition of sculpture that visually narrates, as in Catholic churches, pious deeds to teach those who could not read and delight those who did know the reading. Something like a huge stone comic.