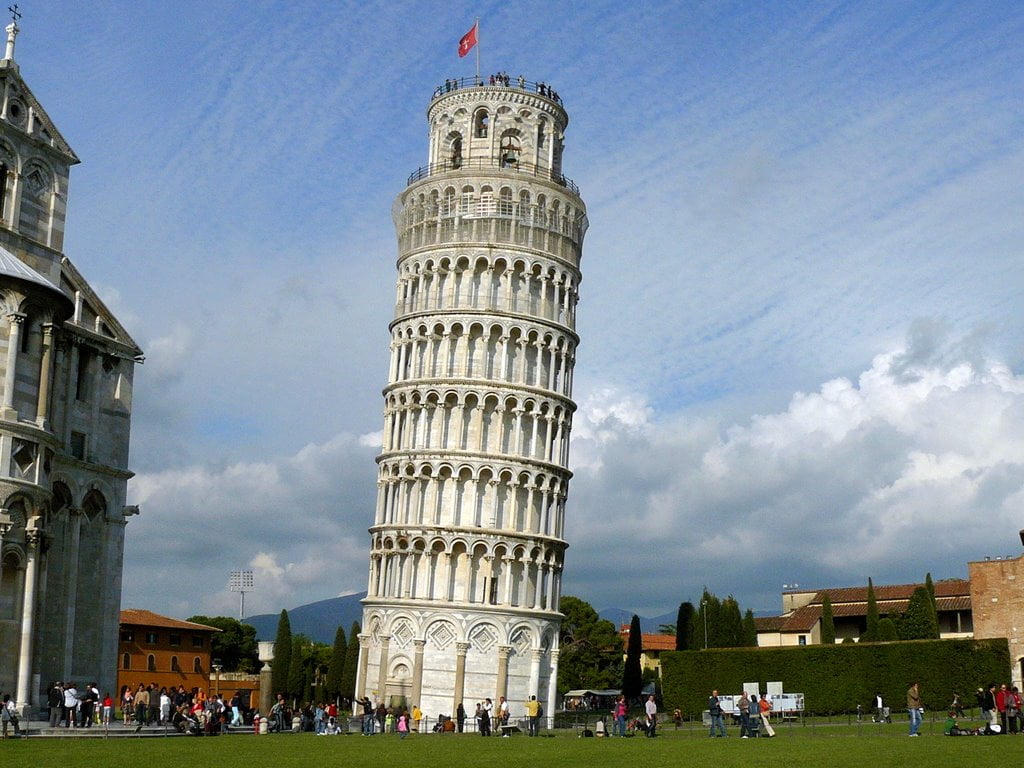 The leaning tower of Pisa is the Bell Tower of the Cathedral of Pisa. The Tower leans towards the South at an angle of 5.5 ° spreading 4.5 m. vertical. It reaches a height of 56 m and his weight is estimated at about 14,700 tons. The Tower has 8 levels, a basis of blind arches with 15 columns, 6 levels with an external colonnade and ends in a Bell Tower. The internal spiral staircase has 293 steps.

Was built to remain in an upright position as all the towers, but began to bend as soon as construction began in August of 1173. Since its foundations only have insufficient 3 meters depth, soil started to recede and has continued to do so since then.

Its total construction process until its current 56 meters of height spans more than two centuries, in which action was taken to correct the skew – with different success – and avoid its collapse.

We could summarize its construction in several stages and attempts to correct the tilt:
•the three first floors of the tower were built between 1173 and 1178 and since then started to sink towards the North. The construction comes to a standstill.
•In 1272 resumes construction when it has a tilt to the North of 0.2 degrees off vertical. In 1278 the seventh level by one higher than the other side to match the tilt is reached, but what you get is that the tower now happens to lean towards the South with a slope of about a degree. The construction stops.
•In 1360 inclination has increased to 1.6 degrees. In the work of the Bell seeks to correct skew by adding six steps from the seventh cornice up to the Bell Tower on the South side and adding only four on the north side. The Tower leans even more.
•In 1370 Tower is officially completed.

There were other fruitless efforts by straightening the tower and that they actually ended it sinking more. In 1838 the roads surrounding the base of the Tower ended up flooding by groundwater and caused a major collapse. In 1934 Benito Mussolini sent to reinforce the walls sealing the inside and resulted in a disastrous collapse of more than 30 cm.

being already at a critical slant and at serious risk of collapse not only by its angle but by its own weight, the tower was closed to the public in 1990, and the Government convened an international group of specialists, engineers and mathematicians, to stabilize the Tower while you lose your inclination.

Followed work-arounds as the place 630 tonnes of lead on the north side in order to counteract the thrust of the Tower, as the of trying to strengthen the subsoil of the side sunk with liquid nitrogen injection and as the removal of subsurface rocks and iron bars in place. All with nothing desired results.

Finally in 1999 managed to stabilize the tower by the removal of the controlled part of the basement on the north side and took back the tower to tilt that it had in 1838. Also installed a complex system of monitoring that he allows millimetre measurement of the structural behaviour of the tower.