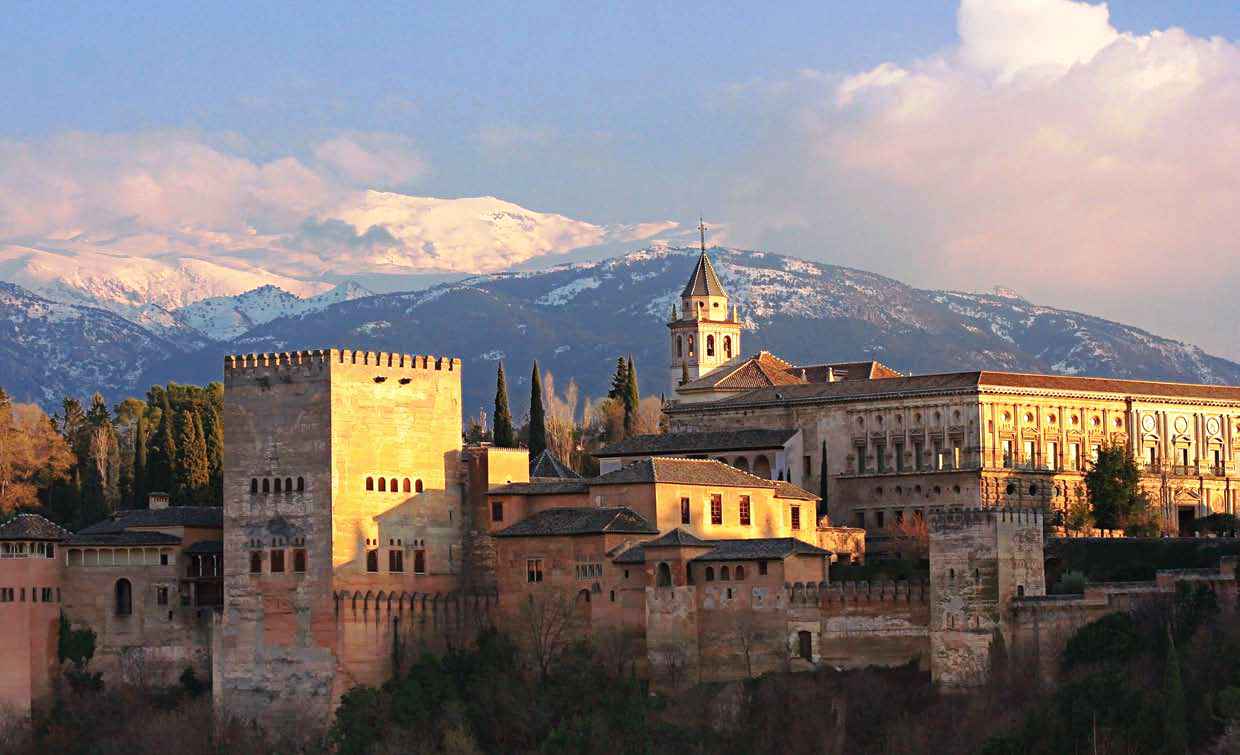 The Alhambra. Declared a World Heritage Site, is undoubtedly the most emblematic monument of the city and one of the most visited in Spain. It consists of a defensive side, the Alcazaba, the Nasrid Palaces and the Generalife Gardens.

Welcoming more than 2,200,000 visitors a year. Watching her from the Mirador de San Nicolas, Bill Clinton said he attended “the most beautiful sunset in the world”. Its walled town occupies 104,697 meters square, in addition to so many of the Generalife. The first references to al-Qal’a Alhamra (“The Red Fortress”) are the ninth century, but it is from 1238 when the Nasrid Sultans there begin to build their buildings, in principle defensive. The main palaces and rooms were built at various times between the early fourteenth century and the second half of that century. Its walls are traveled by thousands of verses inscribed on them: only in the Comares Palace are documented more than 3,000 inscriptions in Arabic. It was declared a National Historic Landmark in 1870.

Those who know her well say that there is usually one, but many Alhambras and also there are many ways to approach the most famous monument in the world Arabic. Seen from the outside, the Alhambra looks like a castle, but his look is strangely fortified since the thick forest of towers emerging landscape is the worst that can be conceived for military defense. Within those walls that appears is an authentic palace city, whose only military zone is the Alcazaba, certainly the oldest part of the complex, with large towers that offer spectacular views over Granada and vega. From the Alcazaba part one way, Real Street, which borders the palaces and reaches the urban area itself, which can still be seen the remains of houses and workshops of the Nasrid rulers servers. All microcosm collected on itself and dominating from above the city of Granada which, in the words of the Arab poet, “is the wife shown the mountain, her husband.”

If you prefer to put aside military stays, sultans or craftsmen, nature offers that other “mysterious life of the Alhambra” of Titus Burckhardt speaking to refer to water, from the river Darro, enters the city through the Acequia Real and complex network of branches, galleries and albercas.Las pipes are usually always a very slight slope, conscious planning remansar waters seeking for the best use. The lush vegetation today includes those associated with hydraulic structures has nothing to do with the original, which is largely unknown, but its beauty and harmony are the best testimony to the delicacy and craftsmanship that have guided interventions Alhambra conservatives over the last century.

However, are the palaces, those that attract the attention of the visitor. And, again, in them nothing is what it seems. The richness that catches sight on walls, ceilings or vaults hides the widespread use of humble materials such as brick, mud, plaster, wood or tiles, which make the Alhambra an example of what we now call “sustainability” and has in local resource use its most prominent feature. The marble – from Macael (Almería) – appears on some floors and columns, such as the Courtyard of the Lions, but always within human dimensions and accessible. The contrast with the other hand, a splendid palace of Charles V, designed by Pedro Machuca (d. 1550) and literally built within the grounds of the ancient Islamic city is amazing: strong blocks of stone, high Doric columns or the imposing Italianate facade reflect a powerful and intimidating aesthetic taste, that has nothing to do with the subtle harmony and balances present in the conception of the Nasrid palaces. Not many places in the world where civilizations can see their artistic expressions such acuity compared to within just a few hundred meters. In the Alhambra or what is the same, in the complex history of Spain, such a thing if it is possible.

Muslim craftsmen knew Alarifes and extract a peerless beauty from the media so modest. And they did it with knowledge, technical skill and great care in every detail. TILING tiled In the Alhambra can be distinguished, for example, the 17 types of symmetry patterns that contemporary mathematicians have been able to formulate for the two-dimensional world: so even more spectacular, the pools themselves in places like the Patio Comares symmetrical movements also reflect its waters to act as perfect mirrors of reality. Contemplating the wooden roof of Comares Hall allows three planes carefully arranged so that the light reflects on them so that there is always highlighted the central halo represents the eighth heaven in which sits the throne of God. The Court of the Lions, in short,-whose famous fountain has been recently a splendid restoration is marked by a portico with arcades run that unfold in some of the most beautiful stalactite housing the whole, the impressive cup alabaster serving central source has registered some beautiful verses the poet Ibn Zamrak (d. 1394): “On the surface water and marble seem to be / without knowing which of them is flowing.” Itineraries are indeed countless surprises arise both in the aggregate and for the myriad of details offered to the senses.

The hundreds of thousands of visitors each year the Alhambra include a growing number of Muslim tourists from Southeast Asia, Near East or North Africa. It is likely and desirable that in the future this number will increase. Knowing these people offer a view of the Alhambra, and other milestones Islamic heritage of our country, away from topical and nostalgic nods, but while tolerant, respectful, rigorous and inclusive is a challenge before us. Power indicator will adequately fulfill to know if our country has managed finally take this unavoidable and delicate paper, which has been so often claimed, to serve cultural and human crimp with a civilization that will soon represent nearly a quarter of the population world.