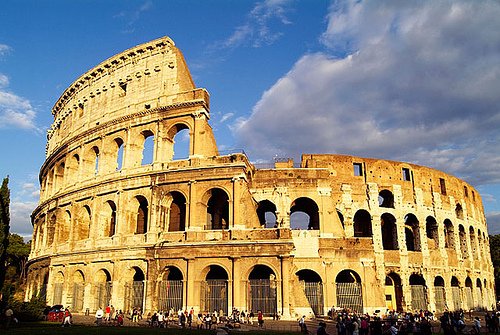 No doubt, placed in front of the Colosseum of Rome is to smell the living history of the great Roman Empire as a great monument which is in very good condition despite the long passage of centuries by their surroundings.

The Colosseum is a must for those traveling to Italy. This is a Roman amphitheater built in the first century in the heart of the city of Rome. They were the emperors of the Flavian dynasty who built it. Colosseum was called with the passage of time by a large statue that was inside of the Colossus of Nero.

Declared a World Heritage Site by UNESCO in 1980, is one of the monuments of classical history of the planet, better preserved.

It had a capacity for 50,000 people and in this place you could see the traditional gladiatorial and other shows like animal hunts, executions, dramatization of famous battles, plays the more classical mythology, in order to entertain the Roman people .

The Colosseum was used for 500 years, even beyond the fall of the great Roman Empire. Many earthquakes and bombings have left the great Colosseum in the state in which you can see today, still standing after all and fully accessible to visitors.

The schedule of visits to the Coliseum are from 8:30 am until one hour before sunset