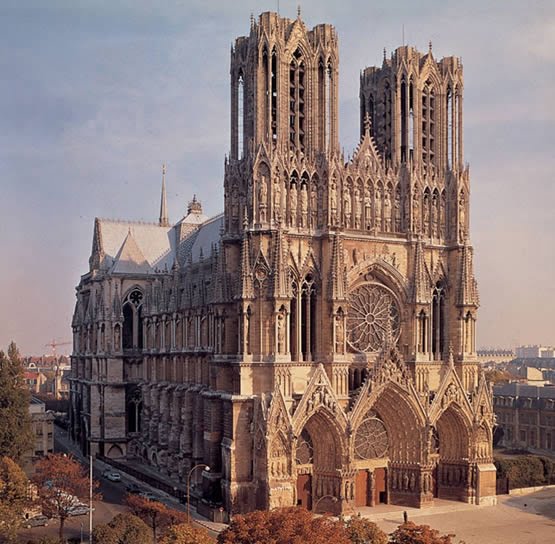 Reims Cathedral belongs to all the classic cathedrals of France, along with the cathedrals of Amiens and Chartres. It is dedicated to the Virgin Mary.

Reims Cathedral was, as Saint-Denis, a deep meaning for the French monarchy. If this second was the seat of dynastic pantheon and guarding the place where the symbols of power, “Regalia”, the first kings were crowned.

Also a fire, as in Chartres, Amiens and many French churches, when was the year 1210, led to the reconstruction of the cathedral. Launched just a year later (in 1211 placed the first stone), materialized in a hundred years. In 1311 it appears that the factory was completed.

Unlike other contemporary buildings, this one know the names of architects who succeeded one another in the direction of the work. The Omo maze provided the pavement of the nave, which was destroyed by replacing the original with a new one in the eighteenth century. Thanks to a drawing we know who worked in Reims, and in this order: Jean d’Orbais, Jean le Loup, Gaucher de Reims and Bernard de Soissons.

Specified in the labyrinth came the work performed by each. It was the first architect of the plant and of the initial work in the east wing to the transept, the second ended the choir and built the foundations of the main body of the building, the western gable and towers, the third spoke at the three gates open at the foot of the building and the last built several vaults (five in total) and the great rose window of the feet.

Reims plant sample, as most salient, hypertrophy of the head, one of the peculiarities of some thirteenth-century French churches, but here comes to occupy just half the building. In the rest of the construction standard guidelines are followed. It has three naves, transept also has three naves and in its elevation, the interior wall canonical presents three levels: bow, clerestory and window.

Header area has developed greatly contrasts with the dimensions of the rest of the building to toe. The breadth of the entire eastern partially justified by the need to locate in it the choir.